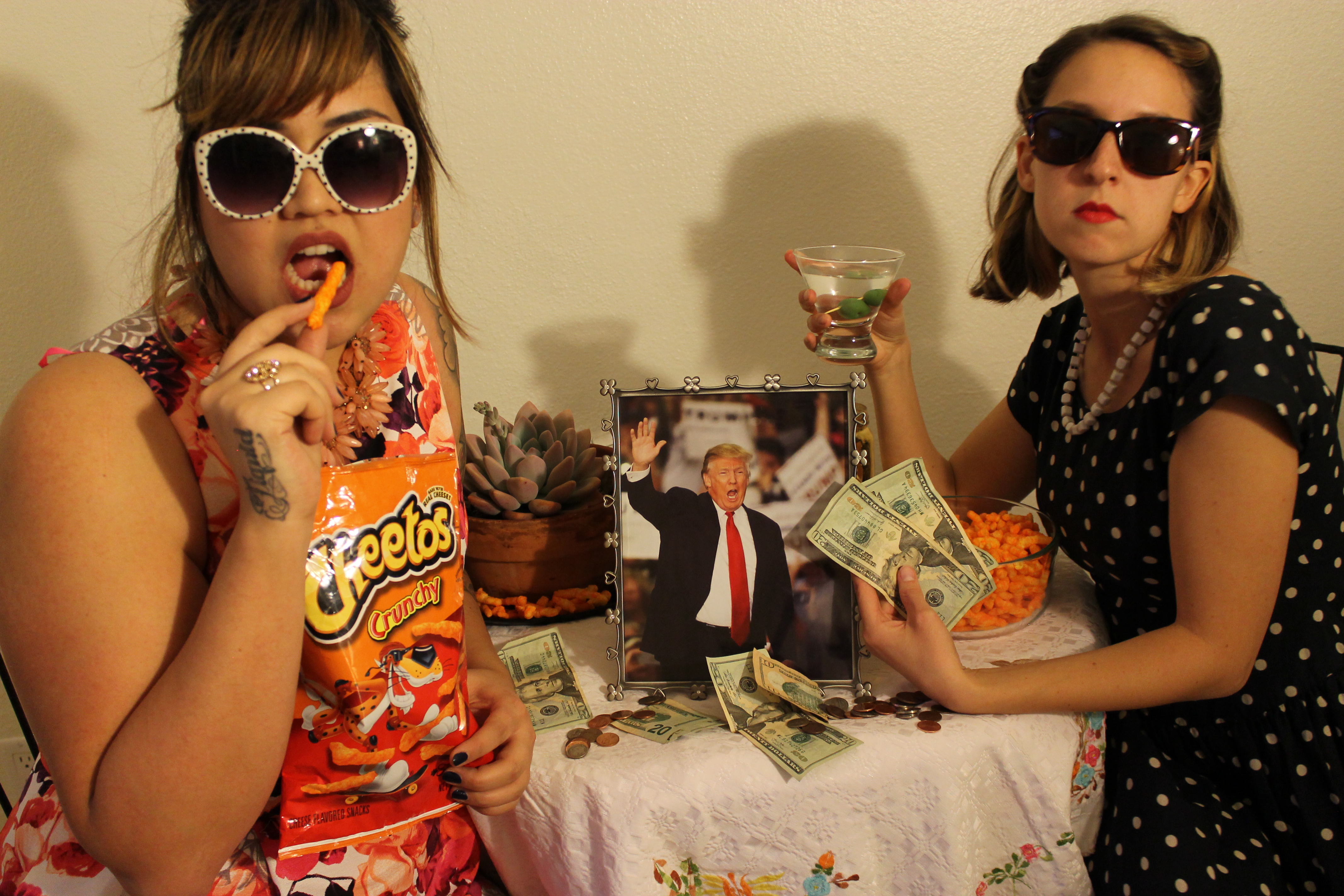 REVENGE OF THE PUSSY!

About the Work/Artist Statement from the Makers

This piece was originally produced for Haight Gallery’s Monster Show in conjunction with Halloween. It predates the election results but remains as pertinent as ever. The call for theme read as follows: a monster is any creature, usually found in legends or horror fiction, that is often hideous and may produce fear or physical harm by its appearance or its actions. This is an open call. All artists welcome to submit!

Threadwinners is pleased to present this horrible monstrosity entitled, REVENGE OF THE PUSSY!!! It pays homage to  1950’s sci-fi and horror movies with a political flavor. Originally, this piece was going to be something of an exquisite corpse, but it turned out to be slightly more planned than that.

Alyssa began making a Count Trumpula (CT), while Liz crocheted a Hayao Miyazaki-esque inspired cat. After the recent video footage leak of Trump admitting sexual assault on women by, “grabbing them by the pussy,” this was just too fitting. And in the same manner that Trump doesn’t seem to have boundaries or care to stop the nonsense, we decided not to either. Hyperbolizing everything was essential in expressing all that has been occurring this political season. The large Mother Pussy is vomiting up smaller cats to create her army of micro-pussies that surround CT with the threat of homicide and consumption. This was Threadwinners’ way, as feminists, to reclaim the idea of the Nasty Woman and the derogatory, sexually degrading and reductive term, Pussy. Her textured tongue wraps around CT’s burning coffin and ends with a giant all seeing eye positioned over the Wall’s mouth; and due to its juxtaposition, the eye and mouth coalesce into the Wall’s face. In the background, the Monster Wall, complete with a small barbed wire fence, stands erect on a swampy landscape to close off any escape for CT, as well as representing his attempt at foreign policy to bar off entry to Mexican immigrants. And lastly, a cross engulfed in flames is situated behind Trump to represent our dismay at the archaic and anachronistic interpretations of the Christian faith used as a tool to generate xenophobia, Islamophobia, and insane, extremist nationalism.

The above images allow you to explore and witness this devastatingly gassy and hellish swamp (this statement also predates the #draintheswampmotto—it’s like we’re prophets or something?) of a political landscape.