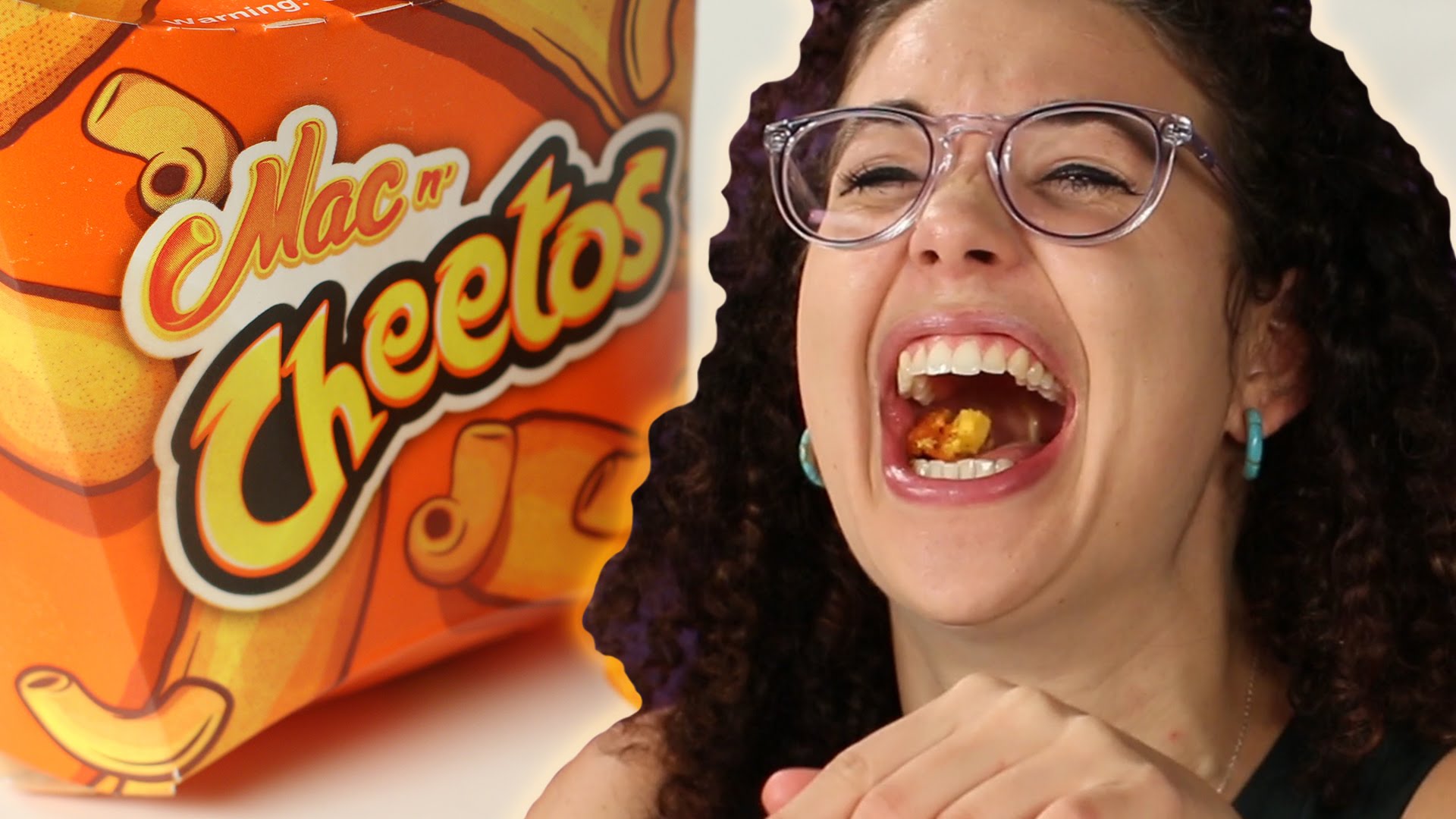 We encourage you to embrace the Art, Writing, Sociology, Philosophy, and Armchair Culture Critiques that this digital exhibition has to offer.

My journey with the Mac ’N’ Cheetos from Burger King is as follows:

I saw a new, trendy food item that I wanted to indulge in, had my boyfriend go pick the thing up, and I ate it. There were five crunchy “puffed” Cheetos in the box, each injected with a dose of mac and cheese, most likely fabricated in an anonymous and giant warehouse in the Midwest, as a limited time offer menu item, freeze dried and then shipped out and distributed to your local BK via 16 and 18 wheelers traversing America. It wasn’t good and it wasn’t bad. I certainly didn’t feel healthier for it, but that’s not the point now is it? We ALL go out of our way for particular (cultural) experiences, for the badge of I haves-it-firsties, for inclusion in a specific culture (in my case the junk food(ie) culture), to boast that you did a thing especially if it’s out of your comfort zone, to “grow”, horizontally in my case, from said experience. We have cultural icons like Man Vs. Food, Guy Fieri, the Epic Meal Time bros, or food eating superstar Kobayashi to cite whenever we think of indulgence, honor, merit and success. Maybe, I had intentions of being the next food porn star after Paris Hilton’s promotional commercial for chowing down on a giant Spicy BBQ Burger in a revealing pleather monokini from, guess who? Burger King! Or not. Anyway, I took a picture of the box for my Instagram account with a tagline that read, “all my dreams are coming true, I can finally die happy,” of course in a purely ironic context did I say all of these things. Of course my whole life, had, in fact, NOT been waiting for this thing to fulFILL me and after the thing was eaten, did I think I could die happy. I just wanted it for the pure experience of a cultural byproduct and out of sheer curiosity, to taste the flavor of this perplexing oddity. My statement was merely a commentary on instant gratification and Xtreme satiation. Tons of people do uncomfortable things for the side effect of endorphins and adrenaline rushes, like exercise, sky diving or rappelling. I must have had a halo of a radioactive afterglow from eating the hot garbage.

I got interesting comments from people that I wasn’t quite sure what to do with. For instance, a certain reaction to the photograph delivered in a succinct matter-of-fact and blatantly tinged with cynicism and sarcasm read, “which works out, because you might actually die from eating those.” I then felt compelled to respond saying that it was, “a one time ordeal” and that, “I, in fact, was still alive,” funnily enough. Did you know that cigarettes are a proven carcinogen? The comment was superfluous, but some people need achievements unlocked like attempting to humiliate and/or degrade other humans for deliberate choices made with an acute awareness of consequence, i.e. nutritional benefits/drawbacks. And at the same time, this particular reaction got me to thinking about shame culture and why we all, yes, we ALL DO IT, at some point in our lives, and if you are in denial about it, you better check yourself.

Shame is by definition — a painful feeling of humiliation or distressed caused by the consciousness of wrong or foolish behavior. Closely related is guilt — who’s definition entails having committed a specified or implied offense or crime. Why should I feel guilt or shame for posting a simple image such as a box of Mac ’N’ Cheetos when someone like Daniel Tosh, from Tosh.O, can get away scot free with telling his audience to go and film themselves (molesting)/touching a woman’s stomach, uncomfortably and without consent?

However, not all comments and reactions were negative in regard to the posted photo. Glenn became profoundly interested in this cultural phenomenon/amalgamation of food fusion, when he inquired to what it actually was. I responded by describing the actual contents within the box and then the metaphorical description of it being, “shame wrapped in repulsion.” He LOVED it and wanted to take the concept to a digital platform via an online open call exhibition of a collection of stories, philosophies, poems, videos, gifs, and images of the things that we all allow ourselves to submit to indulging in without judgements or repercussions. This was exactly the type of catalyst I craved in order to retaliate against the banal and trivial comments about my deliberate decision and to reclaim my unnecessary feelings of shame, rejection, and repulsion due to elitism and moral policing.

Normalizing ‘taboo’ niches and facets of American culture allow our society to be a more inclusive and progressive one that doesn’t demonize the outliers and social pariahs. I think that this exhibition is attempting to do just that. Allow itself to be a gelatinous, amorphous platform with intentions of normalizing our interests and to be amongst peers who have the same mentality.

CHECK OUT MORE AT :